How Fathers Help Curb Violence at High School in Louisiana

Students at Southwood High in Shreveport, Louisiana were not solving their differences peacefully. The police were being called to the school each day. Some children were being arrested. Things kept getting worse. As a dad of an 11th grader Michael La’Fitte did not like what he was seeing. He knew he had to take action.

So he spoke with some other involved dads. They met with High School Principal Kim Pendleton and she welcomed their help. And that’s what started Dads on Duty!

Dads on Duty is now made up of 40 fathers who spend time at the school to help keep watch and create a peaceful environment. They talk to kids. They make bad dad jokes. They help solve problems.

And the rest of the country now wants to learn from their experience and wisdom. In fact, the Dads on Duty is now responding to inquiries from over 100 schools and colleges from across the US who are interested in running their program at the local school.

Dads on Duty is a great example of the power of responsibility, creativity, and taking action.

Check out this inspiring video, see the dads in action.

These real world models help us to think about practical things we an do locally to increase peace.

What do you think? 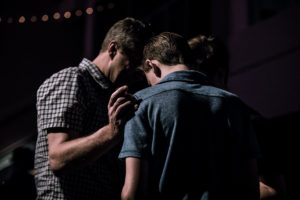